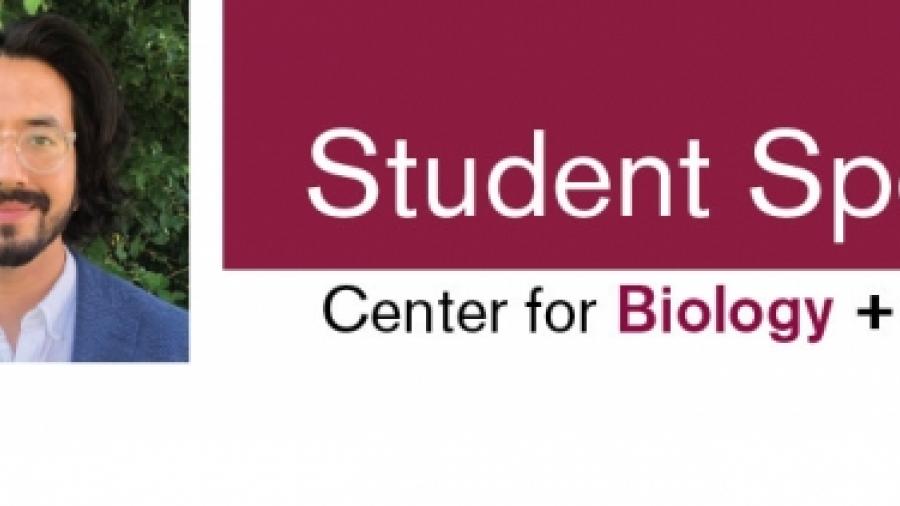 In the summer of 2015, I was setting up meetings all over ASU’s Tempe campus searching for a university job that would reduce my tuition so that I could earn a master’s degree on the side. To my surprise, many of those meetings ended with the same question: “Have you met Jane Maienschein?” And as it turns out - I hadn’t. Apparently, she leads a research center that incorporates history, philosophy, and the life sciences. Those would-be employers must have gotten a pretty good sense of what I was about during our meetings, because when I did meet Jane for the first time, she confidently informed me that I “seemed like one of them.” Five years later, I’m ready to agree. Pursuing a PhD in the history and philosophy of science at the Center for Biology and Society has transformed the way I think about hard-to-think-about problems. More surprisingly, it has also led me to scrutinize a European tradition of meddling with insects.

The photo on the left is of me and an ant I am in the process of carving. Those groupings of three circles are supposed to depict Pierce's triadic theory of signification.

I started my PhD with an interest in symbolic communication, animal cognition, and the concept of information, but philosophy can be confusing. There can be little firm ground to stand on, and it can be difficult to find the proper foothold that makes a project tractable, especially when you’re a philosopher in training. In the end, I decided to examine the way an influential group of insect navigation researchers justify their claims about animal cognition. To elaborate, that means examining the experimental practices and habits of reasoning that warrant researchers’ claims about how insects process informational content.

The project could have stopped there, but the Center had been working its magic on me. I found myself asking historical questions about my group of researchers. I was analyzing their scientific practices to make sense of their claims about cognition while learning that scientific practices have to come from somewhere. People develop and propagate them, and their character is contingent on a vast array of historical circumstances. Thus, in studying this lineage of animal behavior research, I discovered that it belongs to a European tradition called ethology, and that the experimental practices currently supporting researchers’ cutting-edge claims about cognition trace their roots to a prominent family of scholars living in fin de siècle Vienna.

The photo to the left was taken at the 2019 JAS BIO conference at the Marine Biological Laboratory in Woods Hole, MA. Everyone in the picture gave their first history of science talk at a JAS BIO, and I had just given mine that day.

Now that I’m nearing the end of this project, it’s easier to look back and recognize all the ways others have helped me. I was incredibly fortunate that Beckett Sterner, my current adviser, joined the Center shortly after I arrived and developed my inclination toward pragmatic philosophy. Without ASU’s Social Insect Research Group, I would have never learned how much there is to love about ants and honeybees. Stephen Pratt, Robert Page, and Bert Hölldobler were especially accommodating and generous with their knowledge.

Additionally, I was awarded two Ford Foundation fellowships while pursuing this PhD that allowed me to build relationships with other academics from underrepresented groups. Those fellowships helped give me the opportunity to volunteer for ASU’s Prison Biology Education Program teaching college-level courses to incarcerated students. Finally, I have to thank Alan Love and his group of graduate students at the Minnesota Center for Philosophy of Science, who have adopted me as a visiting fellow for the last year.

Looking forward, I’m preparing for the increasingly fraught academic job market. Whatever happens, I expect to continue working with words in some capacity. I am also planning on taking up beekeeping, enjoy honey, and recreating some of the experiments with which I’ve become so familiar.