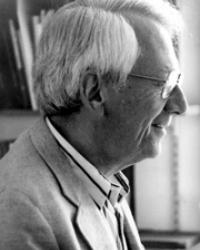 The Richard C. Jeffrey Collection of books and reprints is from the personal library of the philosopher Richard C. Jeffrey. They were donated to the ASU Center for Biology and Society in 2003 by his family. The collection contains a working professional’s library in logic, probability, general philosophy of science, and the history of logical empiricism. Jeffrey himself made major contributions to all these fields, and it is an honor to have this collection in the Center. It contains many first editions and other important books that are now hard to obtain.

Born in Boston on August 5, 1926, Jeffrey started his college education at Boston University. The criticism he heard there of Rudolf Carnap convinced him that Carnap was just the man with whom to study. So after only a year at BU and two in the Navy, Jeffrey enrolled at Chicago and earned an M.A. studying with Carnap. Later Jeffrey collaborated with Carnap on the two-volume Studies in Inductive Logic and Probability. After the M.A. he went to Princeton for a Ph.D. with Carl Hempel. His academic career carried him to MIT, Oxford, Stanford, The Institute for Advanced Study (Princeton), CCNY, Penn, Princeton (for 25 years as Professor of Philosophy), and UC-Irvine. Along the way, he wrote or co-wrote 5 books and edited or co-edited 6 more and authored or co-authored at least 67 papers. These are major landmarks. His The Logic of Decision is still, after 45 years, an important work in its field. His general view, which he called “radical probabilism,” was greatly influenced by the work of Bruno de Finetti, and it remains a powerful focus in epistemology, philosophy of science, and probability theory. Among Jeffrey’s important contributions to probabilism is the principle he proposed for updating your beliefs when the evidence you learn in not certain. The world knows the principle as “Jeffrey conditionalization”; he called it simply “probability kinematics.” Given the importance of his accomplishments, it is noteworthy that Jeffrey was always charmingly self-deprecating. On his website he spent more time emphasizing his collaborators than himself, saying simply “I miss them keenly.”

Jeffrey died on November 9, 2002 at 76 of lung cancer, 5 years to the day after his dear teacher, colleague, and friend Carl Hempel. Jeffrey’s warm and wise humanity was widely appreciated, and he made very difficult technical issues seem approachable, even inviting, by presenting them with unpretentious wit and an informal writing style. For example, in his last book, Subjective Probability, he refers to himself as a “fond foolish old fart dying of a surfeit of Pall Malls.”

The Center for Biology and Society is pleased to serve as the repository for this important collection of books and reprints. Students and faculty alike use the Collection on a daily basis. It reminds us all of Richard Jeffrey’s deep philosophical understanding, his enduring accomplishments, and his wide humanity. All who knew him and who all come to know him through this collection can say, “We miss him keenly.”