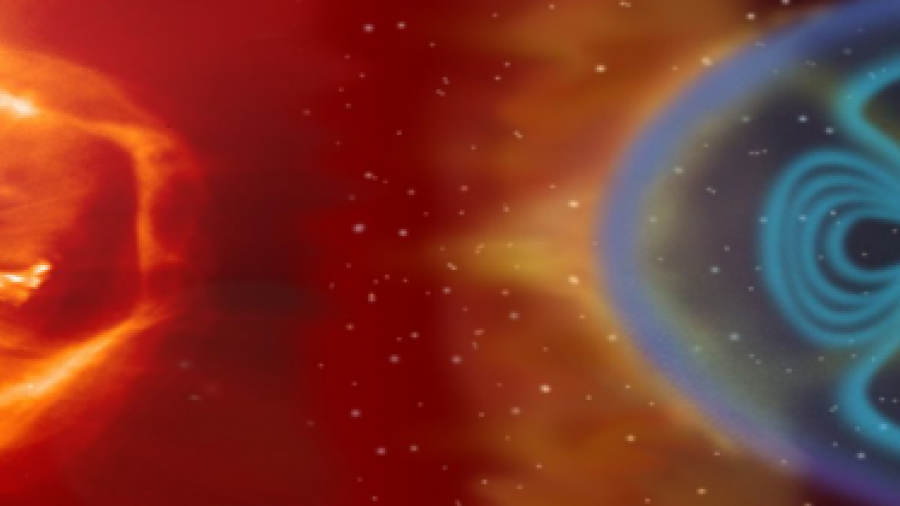 Samantha Thompson, a PhD candidate in History and Philosophy of Science at the Center for Biology and Society, recently began a one-year fellowship at the American Institute of Physics in College Park, Maryland. Thompson was brought on as a fellow through a NASA-funded grant to conduct oral history interviews with those who have helped define and understand the Earth-Sun connection, particularly through the fields of heliophysics and space weather. Thompson attended the Space Weather Workshop in Boulder, Colorado and the Space Weather Enterprise Forum in Washington, DC to better understand space weather. Since the invention of the telegraph in the nineteenth century, space weather has been recognized as a potential natural hazard for technology. Our infrastructure, heavily reliant on electronics and electric power-generating systems, is especially suspectible to space weather impacts. A large solar storm could temporarily wipe out communications and cause wide-spread blackouts. Satellites providing GPS, commercial communications, and weather forecasting could also be disabled. Because of the wide-ranging impacts of space weather, Thompson and the team at the AIP will interview policy makers at the Department of Defense and the Department of Homeland Security, as well as scientists and engineers. Thompson received training in conducting oral history interviews from the Chemical Heritage Foundation in Philadelphia, Pennsylvania. Her completed interviews will be added to the AIP’s collection of 1,500 oral history transcripts.

During her time in the DC area, Thompson is also focusing on researching and writing her dissertation, using the extensive archives of the Carnegie Institution, Library of Congress, Smithsonian Institution, and the collections at the AIP.

Thompson’s research interests concern twentieth century history of technology in the physical sciences. She aims to uncover how technologies develop within the confines of the scientific profession and institutions given the interplay of commercial incentive and scientific need. Her dissertation looks at how television technology was adapted by astronomers. In the early 1930s, astronomers realized that they could exploit electronic imaging to gather more light, more efficiently. They began by testing established television camera tubes developed by commercial companies. In the 1950s, the Carnegie Institution of Washington established and funded a cooperative committee to investigate, develop, and market those tubes specifically for astronomical uses, to varying degrees of success. Thompson questions how eager and willing scientists are to accept new technologies into their profession, doubting the assumption that scientists always seek the best ways to practice their art.

In DC, Thompson has been able to interview astronomers who played a prominent role in her dissertation. She was thrilled to meet Kent Ford, who engineered the image tubes used by Vera Rubin to provide evidence for dark matter.