Since the middle of the 19th century, biologists have migrated to the seashore to take advantage of marine organisms and ask an expanding range of questions about life. At first, they carried their buckets, waders, and array of collecting dishes with them to temporary sites, returning to home base to do other work at the end of the season. That soon became tiresome, and by the end of the century, they began establishing permanent seaside field stations. The Stazione Zoologica in Naples (from 1874) and the Marine Biological Laboratory in Woods Hole (from 1888) attracted leaders in many biological fields, and helped establish biology as a modern science. 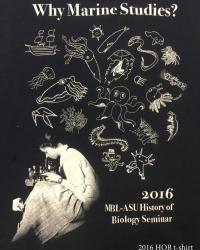 Flexible research funding allowed researchers to pack up their university labs, including graduate students, and migrate to institutions that provided not only wonderful and unique facilities, but also a cloistered environment that made possible a special kind of interdisciplinary and collaborative science. Physiologists, evolutionary biologists, embryologists, ecologists, and other -ologists, who worked in different departments at home, now encountered each other in the laboratory and library, and also on the beach and in each others' homes, sharing ideas and techniques in a relaxed and less competitive environment. The creation of educational programs both informed the general public about advances in biology and disseminated new approaches and ideas to the next generation of biologists.

Yet by the late 20th century, changes in biological research began to undermine some reasons for working by the sea. Shifting epistemological assumptions within the biomedical sciences decreased biodiversity at the lab bench while increasing the use of a limited set of pliable model organisms that could be sustained and propagated anywhere. Gradually, demand fell for specimens dredged and netted from the sea. Consequently, it had become harder for some researchers to justify expending precious research funds to relocate to seashore stations.

Yet, it remains valuable to shed the constraints of home to benefit from different perspectives and reinvigorate their research. Marine laboratories continue to introduce researchers to cutting edge technologies inaccessible at many institutions, and the educational mission remains as significant as ever. Even obscure marine organisms deserve a second chance as research subjects. But are these advantages enough? Can these benefits be configured into a sustainable model for marine stations of the future?

This seminar will examine the history of marine stations and the work done there. What questions have called for marine studies, who has been doing the work, where, how and with what techniques, and why? To what extent is the “close witness” gained by actually being at the seaside along with the organisms and their environment important? Does it matter to have a seaside window on climate change, for example?

When does it make sense to work in a different place as a sort of scientific retreat from normal routine? As we look forward, how can marine institutions balance goals of welcoming summer visitors while also supporting year-round research and educational programs? Can marine stations provide an intellectual interface between biology and society? What is the role of marine studies today and of marine institutions? We will bring together a mix of historians, philosophers, and biologists, including those from the MBL, to address these questions.