The MBL-ASU History of Biology Seminar is an intensive week with annually varying topics designed for a group of no more than 25 advanced graduate students, postdoctoral associates, independent scholars, and established researchers in biology, history, philosophy, and the social sciences. 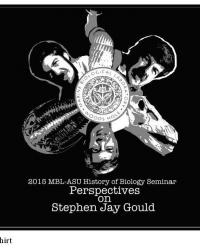 Biologist, historian, philosopher, popular science writer, public intellectual ­Stephen Jay Gould played many roles. We will focus on his contributions within each of these arenas, and how such diverse efforts were related or in tension. We will consider the relevant scientific, philosophical, political, cultural and institutional contexts, with due attention to Gould's collaborators, foils, and critics, and to other scientists who have played a similar variety of roles. Topics will include: biology as a science of "form;" biology as a lawlike science; biology as an "historical science;" levels of biological organization and causation; the "adaptationist program;" the meaning of "Darwinism;" science and racism; evolutionary biology, religion and morals; scientists as (and engaging with) historians and philosophers; the "popularization" of science and the upsides and downsides of taking on this role; and how does baseball fit into all this?