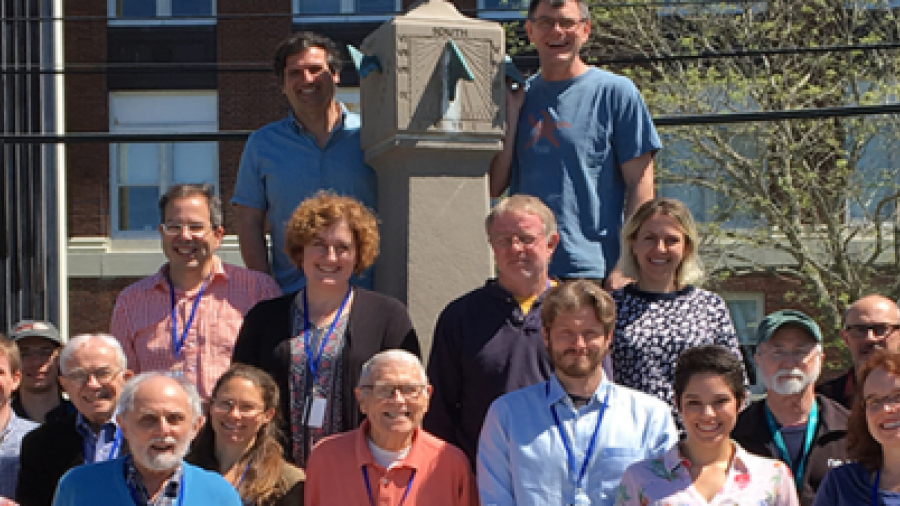 Last month, an eclectic mix of researchers from different backgrounds, disciplines, and nations descended on the seaside village of Woods Hole, Massachusetts, for the 31st annual History of Biology seminar at the Marine Biological Laboratory. The theme of this year’s seminar, “A Century of Engineering Life: Populations and Ecosystems,” expanded on last year’s theme, which examined engineering at the cellular and organismic levels. The shift in focus from microscopic to macroscopic phenomena promised a chance to engage with a variety of fascinating, even provocative, topics, and the proceedings did not disappoint.

The seminar officially commenced on Thursday morning, when Jane Maienschein, Director of the HPS Program at MBL, welcomed participants and explained the seminar format. She was quick to thank her fellow Seminar Directors, John Beatty, Jim Collins, and Karl Matlin, for their contributions, and she provided warm introductions for “legacy” hosts Garland Allen, Harold Burstyn, and Everett Mendelsohn. After describing the rationale and the expectations for this year’s theme, Maienschein recounted the fascinating history of the MBL and its unique place in the history of biology, thus setting the tone for the rest of the week. She was followed by Andrew Inkpen, who led a discussion on the history of the artificial-natural distinction in the ecological sciences that was framed around Peter R. Grant’s famous essay on what it means to be a naturalist in the twentieth century. Inkpen introduced participants to historiographical concepts like the “new wild” and “rambunctious gardens,” and he explained that Earth’s increasingly admixed biota troubles ecologists in three significant ways: it results in the loss of study objects, it distorts our view of what is “natural,” and it makes interpreting history becomes more difficult. During the conversation that followed, several participants showed a willingness to accept that the first two concerns could be accommodated within the “new wild” paradigm, but the third concern struck an ominous chord for historians in the room. Meanwhile, John Beatty returned to the artificial-natural distinction during the afternoon session but focused on a single case study: the violent tornados that tore through Cathedral Pines in 1989. He offered insightful analysis of Michael Pollan’s “gardening ethic” within an engineering context, and he offered participants new ways of thinking about contingency and intentionality in nature.

The next day opened with Karen Rader’s session on zoos as engineered nature. She cited numerous examples from the history of biology but focused on a series of recent experiments at Zoo Atlanta. Researchers provided orangutans with interactive touch screens in an exhibit that otherwise strives to emulate natural habitats. This prompted a lively discussion about the interface between technology and nature, and the myriad ways in which zoos have complicated traditional ideas about wildness and artificiality throughout history. Curt Meine followed up with an extended discussion on conservation and preservation. He led a discussion on the legendary Mexican ecologist Arturo Gomez-Pompa, who discussed the trouble with wilderness years before Cronon did the same, and he touched on several landmark concepts in both the environmental literature and the engineering literature. The conversation that followed yielded new perspectives on shifting baselines, socio-ecological systems, and wicked problems.

The seminar reconvened on Saturday morning, when Tiago Saraiva and Kathry Denning led a discussion on colonialism as an engineering project. Saraiva cited Osborn’s famous article tracing the roots of acclimatization campaigns back to the Enlightenment, and he explained how colonialism and engineering had evolved in the years that followed. He also discussed his research on the cultivation of oranges in northern Africa, and he challenged participants to consider everything that travels with colonial organisms, and to ask what happens to organisms already there. Denning followed with a talk on zoo exhibits in 1880s Paris. She explained that some Inuit people were showcased along wild animals, and she reflected on the significance of those decisions. She also apprised participants of all the latest developments in the Pleistocene megafauna debate, and suggested ways in which the overkill-vs-climate debate encapsulates larger discussions about anthropogenic influence and environmental resilience. Tiago Saraiva returned to the stage just before lunch, offering an extended analysis of agriculture and nationalism. Drawing from his award-winning book on fascism and science during the interwar period, Saraiva explained that conservative back-to-the-land movements in Nazi Germany were in fact acute expressions of modernity. This prompted several people to comment on the curious connections between nationalism with imperialism. During the afternoon session that followed, Luis Campos served as emcee while participants asked Gar Allen about his Michael Mizell lecture connecting environmentalism with eugenics. The hypothesis evoked spirited objections and hearty endorsements, but the lively debate was also productive.

The seminar resumed on Monday, when Anita Guerrini led a discussion on why we choose to save some animals and not others. She offered an array of examples, but focused on eradication campaigns in New Zealand, and the campaign to remove feral animals Santa Cruz National Park in the 1980s. In the latter episode, tens of thousands of goats and pigs were killed, but horses were rounded up and spared. This prompted a robust discussion on the nature of invasiveness that echoed many themes from earlier in the week. During the late morning session, Luis Campos led a timely discussion on re-wilding and de-extinction that placed cutting-edge science in deep historical context. He noted that plans to resurrect the mammoth were only discussed in a speculative manner just a few short years ago, but that most researchers now accept it as inevitable. In light of these developments, Campos toyed with the idea of relabeling the Anthropocene, perhaps to Anthropobscene or Anthroposyn.

The following morning, Daisy Ginsberg discussed the role of art and speculative design in engineering life. The only artist among the group, Ginsberg convincingly demonstrated that art and design have influenced the life sciences throughout history, and that they will prove especially important to the rise of synthetic biology. The discussion that followed confirmed that participants had a new appreciation for the fictive and the imaginary, and their respective roles in the scientific process. Just before lunch, Jim Fleming discussed historical attempts engineer the Earth’s atmosphere in science, fiction, and the popular imagination. Noting that geoengineering and terraforming are necessarily imbued with philosophical assumptions, he asked whether supporters of the Earth-system concept recognized their own biases. In the process, Fleming offered criticisms of Big History that were at once well-reasoned, insightful, and convincing. Finally, Kathryn Denning led a discussion of engineering on other worlds that focused on the concept of planetary protection in theory and practice. She pressed participants to consider whether morality should influence the practice of planetary protection, whether biospheres and potential biospheres have rights, and whether the increasing number of non-state actors with access to space changes how we answer these questions. Denning ultimately suggested that planetary protection might represent a classic “wicked problem,” where solving for one variable necessarily introduces other, as-yet-unknown problems.

The seminar also featured three presentations that were slightly different from the others. On Saturday, Rebecca Reider joined the group via Skype from her home in New Zealand to discuss her recent book, Dreaming the Biosphere, which every participant read prior to arrival. Reider was forthcoming about her experiences researching and writing the book, readily shared her opinions about why and how the Biosphere 2 experiment failed, and patiently answered questions about investor banker Steve Bannon, whom she interviewed for the book. Meanwhile, on Monday afternoon, Kevin Esvelt discussed his plans to use CRISPR gene-drive technology on mice in Martha’s Vineyard and Nantucket, and on rats in New Zealand. Recognizing that his experiments are fraught with controversy, he described his extensive attempts to educate citizens in the potentially affected communities. As if that was not enough, Esvelt also defended his belief that science should be free, open, and accessible, and he described his lab’s efforts toward that end. The presentation prompted vigorous debate. Several participants praised his science and his transparency, but they openly wondered whether Elvelt had truly considered his experiments’ potential ethical, environmental, and political implications. Finally, organizers and presenters ceded the floor on Tuesday afternoon, allowing the seminar’s attendees to share what they had learned over the preceding week. Some staged a dramatic play, while others discussed the significance of the various sculptures on the MBL campus. Attendees included Matt Chew, Eli Gerson, Abe Gibson, Kinley Gillette, Christine Keiner, Patrice Kohl, Josh McGuffie, Raylee Otero-Bell, Christian Ross, Chris Young, and Taylor Zajicek.

Every presentation advanced challenged participants to rethink both the history and the historiography of biology. Every presentation inspired robust debate, but participants remained uncommonly congenial and supportive throughout the entire week. It would be easy to attribute the seminar’s success to some sort of serendipitous alchemy, and to take for granted that a week of intensive brainstorming will necessarily produce novel ideas. In fact, the seminar succeeded because organizers saw connections where they had not previously existed, and they conspired to get people with similar interests in the same room to make sense of it all. The week ended with an agreement that the seminar could easily result in an edited volume of substantial value, especially when paired with the previous year’s seminar.